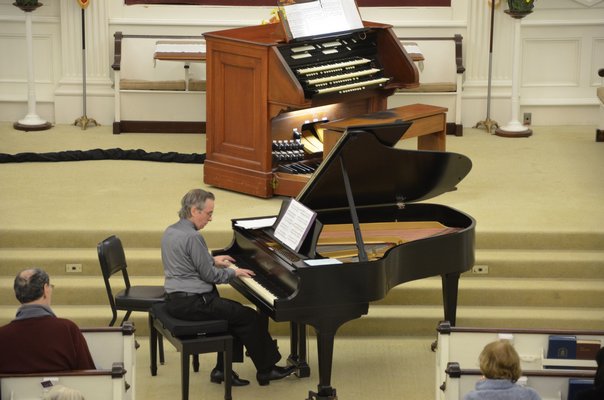 Here is a newspaper clip of a recent Steinway restoration that literally came to me in pieces.

Matt Wilke, who was originally commissioned for the Steinway refinishing/restoration job had unexpectedly passed away after having only dismantled the piano case and stripped off the old finish.  Matt’s death was a tragic loss of life indeed, yet the task of now finding a well qualified restorer who would be willing to take on a project such as this (dismantled, unlabeled parts, and now  some missing parts) was apparent to the many donors to the project.  Mr. Richard Realander, First Presbyterian  piano technician and G.C. of the Steinway restoration project, had heard about me  from a Mr. Maguire who himself was part of Mr. Wilke’s team to help with the restoration.  Through many painstaking hours of communications, labor, and sheer determination, the project was hailed a success in the East Hampton Star (November 6, 2013).  This task was also completed with the help of fellow technician Mr. Lee Dobrins.

Gennaro Piano was honored to have the opportunity to refinish the historic baby grand for the First Presbyterian Church of East Hampton.

The East Hampton Press says “After a very labor-intensive restoration, the Steinway piano at the First Presbyterian Church of East Hampton now can ring out as it first did when it was built in 1927.”

A concert took place on October 26, 2013 to celebrate the restoration as well as the 50th anniversary of the church’s Austin pipe organ.